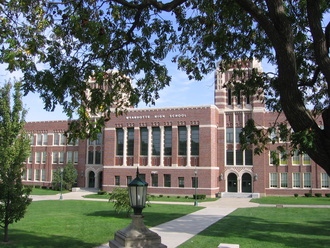 The sale of the golf club property was not long in coming. By the mid 1920s, the Kansas City, Kansas Board of Education was looking for property on which to build a new high school, as the existing school site at 9th and Minnesota offered no real possibilities for expansion. The site that they settled on (possibly at the suggestion of board secretary George Widder, who lived across the street) was the golf course. In July 1927, the board tentatively entered into an agreement with Hoel to exchange the former high school athletic field at 14th and Armstrong and $125,000 for the golf club property.

The sale and exchange of properties was completed on February 16, 1928, although for some reason the Westheight Manor Golf Club was still listed in the 1929 city directory. By that time, Hare and Hare had prepared a campus plan and construction of the athletic field and stadium was underway. These facilities, designed by H. T. Caywood, engineer, were dedicated in October 1929. The stock market crash brought a halt to any further plans for a new high school building, or so it seemed at the time.

The years leading up to the crash remained relatively good ones for Westheight Manor. There were ten houses constructed in the area in 1927, fourteen in 1928 and fourteen in 1929. Nevertheless, 1927 brought a general reduction in the fortunes of the Midwest, as reflected in the sharp drop in the number of building starts. The farm economy collapsed after doing poorly since the end of World War I, and the over-heated Florida land boom went bust. Locally, conditions were not helped when the 1927 election of Don McCombs as mayor began a period of almost thirty years of corrupt and inefficient machine politics. In sum, 1927 marked the end of the most prosperous and progressive period in the city's history, a period in which the development of Westheight Manor played a major part.

Aside from the decline in building activity, the changes tended to be gradual rather than abrupt. Many quality residences continued to be built in Westheight, both by architects and by speculative builders. Perhaps the most notable of the latter were the homes built by Van Evera & Luce of Kansas City, Missouri. Charles H. Luce was a contractor while John J. Van Evera dealt in real estate and insurance, both with offices in the Ridge Arcade Building. Together in 1928 and 1929 they built eleven houses in Block 15 of Westheight Manor No. 2, most of them excellent examples of the 1920s Tudor Revival.

Even with the onset of the Great Depression, growth in Westheight never entirely ceased. In 1920, there were still thirteen new houses built in the nieghborhood. This may have deceived Hoel into believing the local economy could still support another substantial residential development. The property in question was the old high school athletic field site at 14th & Armstrong, which Hoel had obtained in his swap with the school board in 1928. A subdivision plat for the development, to be called Fife Park, was drawn up by Charles E. Keyser and filed on June 12, 1931.

At the same time a second architect, Hal A. Stonebraker, drew up plans for 53 houses and five apartment buildings to be erected in the new development. The investors were the widowed Leafa M. Fife, Ernest L. and Edna Fife Betton, J. A. and Besse Fife Hoel, George C. and Carrie M. Fife, Raleigh O. and Maxine Fife, and George L. and Esther Fife Schmutz. But the depths of the Great Depression was obviously not a time for such an ambitious development proposal. On June 27, 1932, the property was sold to the Catholic Diocese of Leavenworth for continued use as an athletic field, for the new Bishop Ward High School. Jesse A. Hoel reportedly went bankrupt, and at least some of the Fife family felt that they had been cheated by a man who had seemingly built his career on his father-in-law's money.

By 1935, the Hoels' beautiful home in Westheight had been lost in foreclosure to the Home Owners Loan Corporation, and they moved to Excelsior Springs, Missouri to raise horses. Hoel was only 55 years old at the time. The house was subsequently purchased by attorney Carl V. Rice in 1939. Hoel Realty Co., which had moved from 610 Minnesota Avenue into Hoel's New England Shops development in 1929, continued to maintain an office in Kansas City, Kansas through the depression years before finally disappearing from the city directory in 1940.

Westheight Manor continued to slowly grow despite the depression and Hoel's losses. There were three houses built in 1931, and only one in 1932, the depressions' worst year. The remaining years of the decade followed much the same, with three houses in 1933, one in '34, three in '35, six in '36, five in '37, four in '38, and three in 1939. Residential construction began to pick up in pace in the last years of the period, but nevertheless remain extremely sluggish when compared to the 1920s.

In contrast to the slow pace of residential growth, one of the largest single construction projects in the history of Kansas City, Kansas took place in the southern part of Westheight in the middle years of the depression. The old Kansas City, Kansas High School burned on March 3, 1934, forcing the Board of Education to proceed with a new building as proposed in Hare and Hare's master plan of 1928. The architects - Hamilton, Fellows and Nedved of Chicago, were hired within 33 days of the fire, while Hare and Hare were placed in charge of the landscaping and grounds layout. The Board secretary, George Widder, who still lived across from the school site on North Washington Boulevard, oversaw all aspects of the school's furnishing and equipment. In what was apparently a concession to local politics, a Kansas City, Kansas architect named Joseph W. Radotinsky was made associate on the project, and is often unfairly credited with the design.

Ground was broken for the new building on July 19, 1935, with construction essentially completed by March 4, 1937. Work on equipping the building and finishing the grounds continued through the summer. Wyandotte High School opened for classes in September 1937, and was immediately hailed as one of the finest educational facilities in the country. Final costs were nearly $3,000,000, with a substantial portion of that being a Public Works Administration (WPA) grant.

By the time Wyandotte was completed, the economy was beginning to show signs of revival. Several interesting projects were underway in Westheight in 1938, including the area's first modern house, that of Dr. Merle G. Parrish at 1823 Washington Boulevard. Across the street, at the northwest corner of 18th & Washington Boulevard, Grace Lutheran Church occupied a building begun in 1928 but never fully completed. This property was purchased in 1938 by Central Christian Church and the enlarged and completed church building, designed by Felt & Kriehn, was finished by February 1940.

The revival of building was generally put on hold by the outbreak of World War II. Nevertheless, from 1940 through 1946 there were 22 houses built in Westheight, at about the same rate as in the Depression years. These included a number of surprisingly early examples of the split-level type of design common to the 1950s. Also of note was the largest house to be built in the part of Westheight lying south of State Avenue, a Tudor style residence for Luke D. Russell, owner and publisher of The Shopper, erected in 1940.

As the economy returned to peace-time prosperity, there was an enormous pent-up demand for housing. Although the greater part of Westheight was solidly built up by now, for some reason large parts of Blocks 21, 22 and 23 in Westheight Manor No. 3, just south of the park, remained undeveloped. Beginning in 1948, a number of substantial new houses were built in this area which in their design reflected a significant shift from the more traditional tastes of the previous two decades. Instead, the sprawling one-story houses reflected the Ranch style developed in California in the late '30s and early '40s, with informal floor plans and large areas of glass.

The first to be built in this style was the new home of dairyman Fred Meyer, built in 1948-49 at 2027 Freeman Avenue. It was soon followed by the home of Norvel E. Smith, just across the street at 1514 North 21st Street. In these two instances the architect is unknown, but the next house in the series, for Henry Shondell at 2002 Freeman, was designed by James F. Terney. Terney was a Kansas City, Missouri architect noted for his modern designs in the 1930s, and the Shondell house seems more consciously modern than its neighbors, with more than a hint of Frank Lloyd Wright in its horizontal lines. Two more houses in the California Ranch style followed in 1951, for Clarence E. Falconer at 2007 New Jersey and John F. Ryan at 2015 New Jersey. The Falconer house uses more traditional Cape Cod detailing, while the Ryan house could well have been built by the same designer that did the Meyer and Smith houses.

Jesse A. Hoel, without whom Westheight Manor in its developed form would not have existed, played no role in its final growth. In 1941, he and his wife had returned to the city from Excelsior Springs, buying a house at 638 East Meyer Boulevard in Kansas City, Missouri. And in 1945, J. A. Hoel returned to the real estate business when he formed a partnership with his son, Robert C. Hoel, with offices at 4101 Main Street in Kansas City, Missouri. Jesse A. Hoel died on September 10, 1951 at the age of seventy-one, and was buried at Floral Hills Cemetery. Besse Fife Hoel died December 21, 1963, and was buried beside her husband.